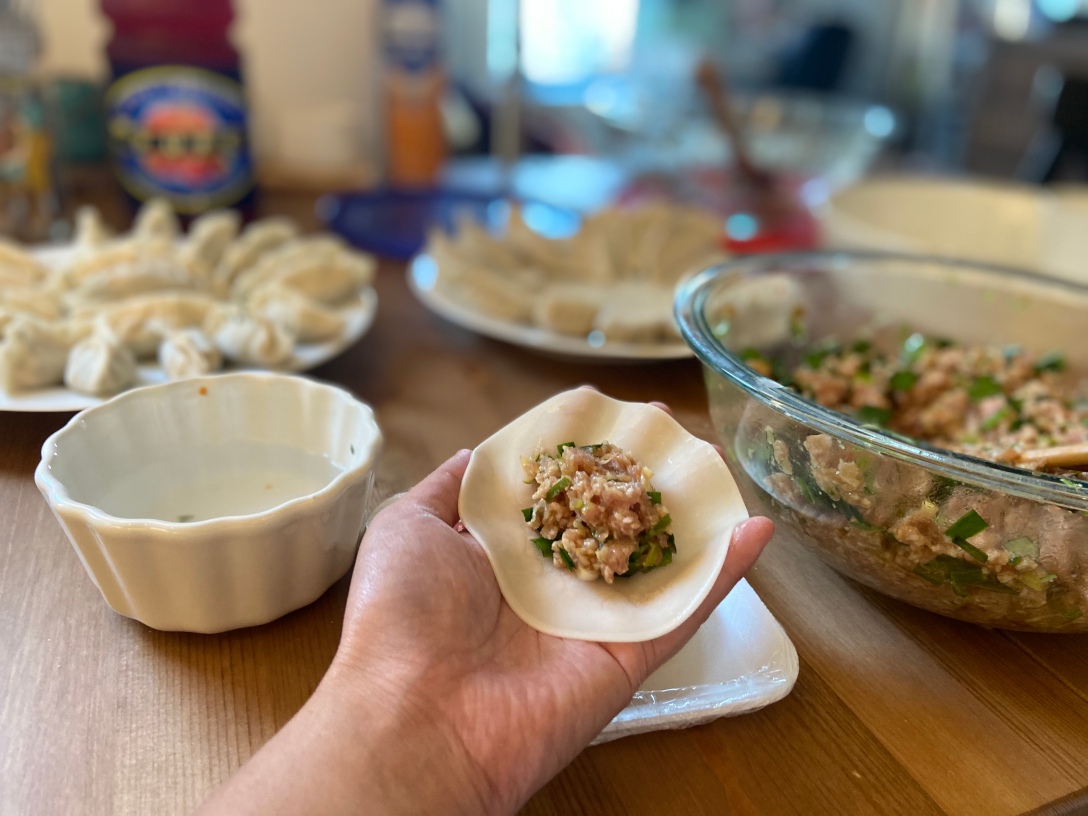 Last weekend I set off on an endeavor to make Chinese dumplings from scratch. As a Chinese adoptee who grew up in the United States I haven’t made food from China that often, but I was inspired to make them after seeing my partner make food from his birth country, Bolivia. I wondered what it could be like to explore my heritage through food, especially when I hadn’t had many opportunities to do so growing up.

Food is an essential part of culture, but most importantly, it is something that connects us to our families and our communities. I decided to make Chinese dumplings because making dumplings is a family-oriented activity that is often passed down from parents to children. While I didn’t have that connection to my culture growing up, I have recently thought of ways that I could learn more about my Chinese heritage and subsequently share it with my friends and family.

Making the dumplings was surprisingly fun, despite how time-consuming it was. I first went to H-Mart, a Korean grocery chain, and picked up the ingredients that I needed to make pork dumplings. Scallions, Chinese chives, ground pork, oyster sauce, cooking wine, and sesame sauce were all on my list. I left the store with about $30 worth of items, including pre-made dumpling wrappers to use for my first time making dumplings.

Dumpling Making Round 1: The Beginning

After getting all the ingredients, I went home and mixed the pork and scallions together, along with all the sauces. I then let the pork filling marinate for over an hour before I cut up the Chinese chives and combined them with a few tablespoons of sesame oil. After the filling was ready, I mixed everything together and started the process of folding and creating the dumplings.

The process of folding was a little tricky at first. I researched different folding methods and watched a lot of videos for inspiration. After wetting the edges of the dumpling wrapper, I used chopsticks to put about a tablespoon of filling in the center and folding small parts of the wrapper along one side.

After a while, I started to get the hang of it, and I ended up with some pretty decently-wrapped dumplings!

After making my pork dumplings, I realized that I had a lot of filling left over. This gave me the idea to try making vegetable dumplings this past Friday for my friends.

The next week, I tried making vegetable and pork dumplings using the same method. For the vegetable dumplings, I combined bok choy, chives, scallions, Shiitake mushrooms, and a little bit of carrots into a mixture. I then sautéed everything for a few minutes until the vegetables were softened, and then added oyster sauce, sesame oil, and cooking wine.

Both types of dumplings ended up being well-received by my friends. I don’t think I’ll be going back to buying frozen dumplings anytime soon, since fresh ones were so mouth-waterlingly…well, fresh!

I still wonder what types of family traditions I would’ve celebrated with my family had I not been adopted. I often think of making dumplings as a communal activity (like that one scene in Crazy Rich Asians where Rachel is learning how to stuff and fold the dumplings with Nick’s family.) While I’ve been fortunate to enjoy a lot of my mom’s superb Midwestern and German cuisine growing up, I hope I can learn how to make more Chinese dishes, specifically ones from my region, as a way to pass down tradition and share some delicious food with my friends and family.

After making both types of dumplings for my friends, I decided to make the wrappers from scratch because I had excess filling and vegetables left over. Making the dough from scratch wasn’t as difficult as I thought it was, because the only ingredients were flower and water. After mixing 3/4 of a cup of very warm water with 2 1/3 cups of all-purpose flower, I kneaded the mixture into a large dough ball which I covered for half an hour. After the dough settled for a while, I rolled the dough into a “wreath” shape and then cut it into small pieces. I then created small balls of dough that I rolled into a round dumpling wrapper shape using a conventional rolling pin.

Creating dumplings from homemade wrappers was more difficult than the store-bought ones because the edges were thinner and more uneven. I tried my best to align the edges as I was folding, and eventually I was able to get some decent dumplings out of the bunch.

After wrapping the dumplings, I boiled them and waited for the dumplings to rise to the top of the pot. Dumplings can be steamed, boiled, or fried, depending on your style and taste, but I decided to boil them just to make sure the pork and vegetables cooked evenly.

Overall, the time and effort spent making homemade dumplings was worth it. If you have some extra time on the weekend or want to make something that brings people together, making dumplings can be a great activity for all ages. For me, it’s a connection to my birth country, but also a hobby that I can hopefully pass on to others in the future.

How to Make Chinese Dumplings (Jiaozi)

How to Make Dumpling Wrappers

View all posts by Alyse MeiLan